There’s a pivotal scene near the end of one of my favorite movies, Murphy’s Romance, that I think of often. Emma Moriarty (Sally Field) and Murphy Jones (James Garner) dance around a May-December relationship throughout the story, and now –after Emma and her son move to town with nothing, hurting from a failed marriage and money issues; after Murphy spots her and decides right then and there that she’s the one, only she’s got to figure that out; after Emma starts a successful business boarding and training horses (one, of course, is Murphy’s); and after her ex-husband shows up, only to leave town with his young girlfriend after she surprises him with twin sons (phew) … Emma wonders what can happen next.

Emma: “What’ll I do with my life, Murphy? Should I get rid of the ranch, should I die my hair or put an ad in the singles column, what? Give me some advice, Murphy, you’ve lived a long time.”

Murphy: “You want advice? Write Dear Abby. I’m not a life guard and I don’t put up bail and I’m not your damn Dutch uncle.”

And then, Murphy plants a kiss on Emma, a wonderful wet smooch.

Murphy: “Now, if you don’t know how things are, then you’re not as smart as I thought you were.” 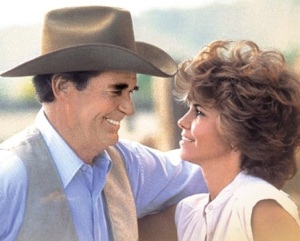 James Garner is honored with a Best Actor Oscar nomination for his portrayal of Murphy, and it’s a joy for me to watch how his character romances Emma –a woman any other woman can relate to. When I was in grade school, my teacher once declared I looked just like The Flying Nun (aka, Sally Field) in my class photo (and I must admit, it was true). So I was drawn to the movie because of the cast. But I watch it over and over again because the themes ring true –even now, after 25 years.

“Now, if you don’t know how things are, then you’re not as smart as I thought you were.”